This site uses cookies to provide an improved digital experience. You can learn more about the cookies we use as well as how you can change your cookie settings by clicking here.  By continuing to use this site without changing your settings, you are agreeing to our use of cookies. Review Zebra’s Privacy Statement to learn more.

“We delivered strong fourth-quarter and full-year results, driven by robust demand for our unmatched portfolio of innovative solutions. In the fourth quarter, we drove higher sales across all major product categories and regions, eclipsing $1 billion in quarterly sales for first time in company history, which enabled us to exceed the high end of our profit expectations. We also made significant progress on our initiative to decrease financial leverage, exceeding our 2017 total debt paydown minimum commitment by more than 50 percent,” said Anders Gustafsson, chief executive officer of Zebra Technologies. “I commend the excellent execution by our teams to exceed our financial goals and advance our Enterprise Asset Intelligence strategy. Zebra is well positioned to continue to drive attractive profitable growth and shareholder value.” 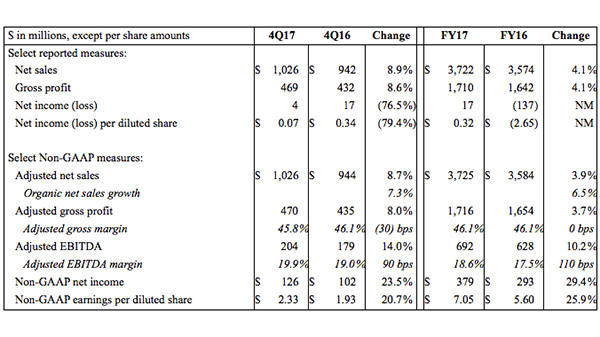 Consolidated adjusted net sales were $1,026 million in the fourth quarter of 2017 compared to $944 million in the prior year period, an increase of 8.7%. Consolidated organic net sales growth for the fourth quarter was 7.3% reflecting growth across all regions, most notably EMEA, Latin America, and North America.  Fourth-quarter year-over-year organic net sales growth was 8.5% in the EVM segment and 5.0% in the AIT segment.

Consolidated adjusted gross margin for the fourth quarter of 2017 was 45.8%, compared to 46.1% in the prior year period. This decrease was due to changes in business mix and higher support services costs. Adjusted operating expenses increased in the fourth quarter of 2017 to $287 million from $275 million in the prior year period primarily due to growth in the business and increased incentive compensation expense related to improved operating results.

In the fourth quarter of 2017, the company completed the comprehensive plan to restructure its debt, which was initiated in July 2017. The actions taken in the fourth quarter included the redemption of the remaining $300 million of 7.25% senior notes and the implementation of a new $180 million receivables financing facility ($135 million drawn as of December 31, 2017).

For the full year 2017, free cash flow was $428 million, consisting of $478 million of cash flow from operations and capital expenditures of $50 million. The company made payments of long-term debt of $1,825 million and received proceeds from the issuance of long-term debt of $1,371 million, resulting in a $454 million net reduction of total debt in 2017. The company made cash interest payments of $195 million in 2017, which included $65 million of debt extinguishment costs during the second half of 2017 resulting from the early redemption of the senior notes.

The company entered 2018 with a strong order backlog and expects first-quarter 2018 net sales to increase approximately 7% to 10% from the first quarter of 2017. This expectation includes an approximately 260 basis point positive impact from foreign currency translation. We expect minimal impact from the company's adoption of new revenue recognition standard (ASC 606) on January 1, 2018.

For the full year 2018, the company expects to generate free cash flow of at least $475 million and continue to reduce financial leverage.

Investors are invited to listen to a live webcast of Zebra’s conference call regarding the company’s financial results for the fourth quarter and full year of 2017. The conference call will be held today, Thursday, Feb. 22, at 7:30 a.m. Central Time (8:30 a.m. Eastern Time). To view the webcast, visit the investor relations section of the company’s website at investors.zebra.com.

With the unparalleled operational visibility Zebra (NASDAQ: ZBRA) provides, enterprises become as smart and connected as the world we live in. Real-time information – gleaned from visionary solutions including hardware, software and services – gives organizations the competitive edge they need to simplify operations, know more about their businesses and customers, and empower their mobile workers to succeed in today’s data-centric world. For more information, visit www.zebra.com or sign up for our news alerts. Follow us on LinkedIn, Twitter and Facebook.

These forward-looking statements are based on current expectations, forecasts and assumptions and are subject to the risks and uncertainties inherent in Zebra’s industry, market conditions, general domestic and international economic conditions, and other factors. These factors include customer acceptance of Zebra’s hardware and software products and competitors’ product offerings, and the potential effects of technological changes. The continued uncertainty over future global economic conditions, the availability of credit and capital markets volatility may have adverse effects on Zebra, its suppliers and its customers. In addition, a disruption in our ability to obtain products from vendors as a result of supply chain constraints, natural disasters or other circumstances could restrict sales and negatively affect customer relationships. Profits and profitability will be affected by Zebra’s ability to control manufacturing and operating costs. Because of its debt, interest rates and financial market conditions will also have an impact on results. Foreign exchange rates will have an effect on financial results because of the large percentage of our international sales. The outcome of litigation in which Zebra may be involved is another factor. The success of integrating acquisitions could also affect profitability, reported results and the company’s competitive position in its industry. These and other factors could have an adverse effect on Zebra’s sales, gross profit margins and results of operations and increase the volatility of our financial results. When used in this release and documents referenced, the words “anticipate,” “believe,” “outlook,” and “expect” and similar expressions, as they relate to the company or its management, are intended to identify such forward-looking statements, but are not the exclusive means of identifying these statements. Descriptions of the risks, uncertainties and other factors that could affect the company’s future operations and results can be found in Zebra’s filings with the Securities and Exchange Commission, including the company’s most recent Form 10-K.

Information regarding the impact of the TCJA consists of preliminary estimates, based on current calculations, interpretations, assumptions and expectations.  These estimates may change materially as we learn additional information about and obtain additional guidance on the TCJA.

Use of Non-GAAP Financial Information

This press release contains certain Non-GAAP financial measures, consisting of “adjusted net sales,” “adjusted gross profit,” “EBITDA,” “Adjusted EBITDA,” “Non-GAAP net income,” “Non-GAAP earnings per share,” “free cash flow,” “organic net sales growth,” and “adjusted operating expenses.” Management presents these measures to focus on the on-going operations and believes it is useful to investors because they enable them to perform meaningful comparisons of past and present operating results. The company believes it is useful to present Non-GAAP financial measures, which exclude certain significant items, as a means to understand the performance of its ongoing operations and how management views the business. Please see the “Reconciliation of GAAP to Non-GAAP Financial Measures” tables and accompanying disclosures at the end of this press release for more detailed information regarding non-GAAP financial measures herein, including the items reflected in adjusted net earnings calculations. These measures, however, should not be construed as an alternative to any other measure of performance determined in accordance with GAAP.

Zebra Technologies to Present at the Morgan Stanley Technology, Media and Telecom Conference 02/23/2018 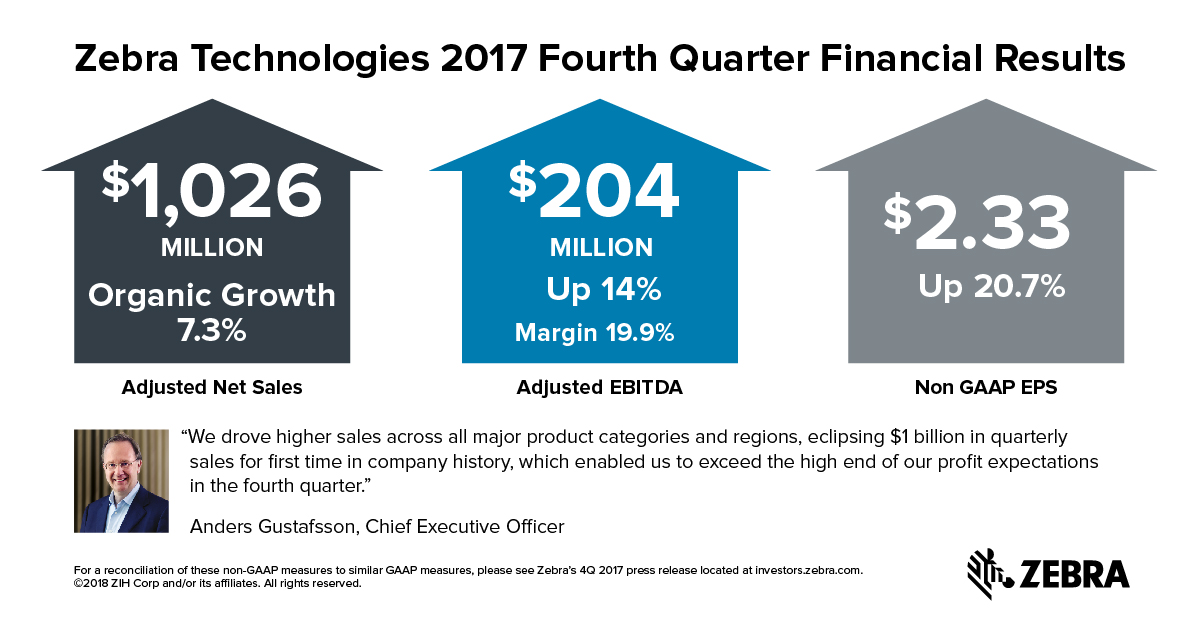